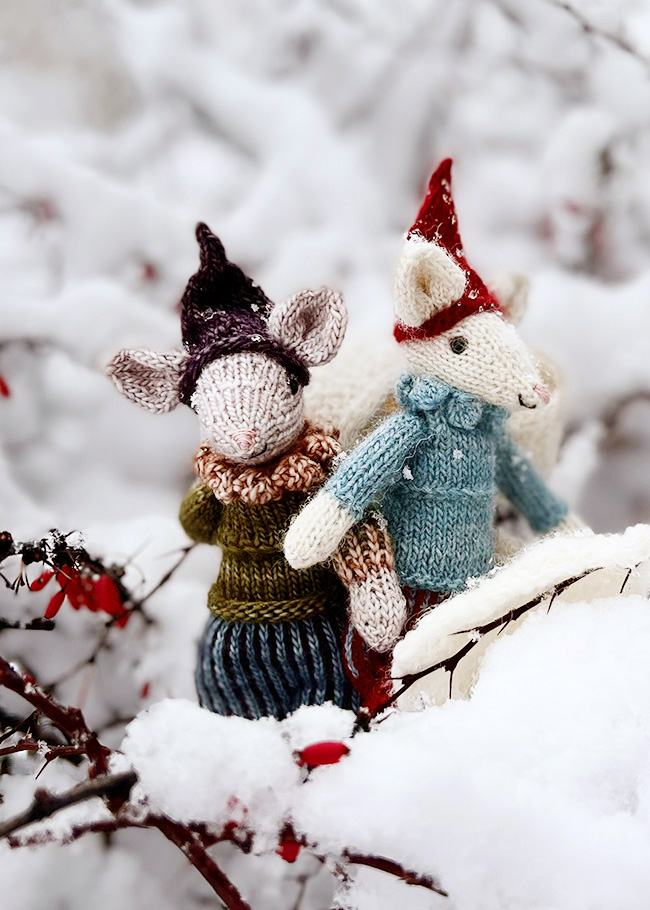 I present to you Casper and Parch!

These two elf mice are adorable, have such unique personalities, and are so much fun to knit up!

Casper is very festive and outgoing in a red and blue outfit, whereas Parch has more of a forest-dweller vibe with a woodsy color scheme.

At just 6 inches/ 15cm tall, this project is a great stashbuster and it knits up pretty quickly!

Yarn Characteristics
Casper is knit in a fingering-weight 100% Fine Highland Wool single ply.
Parch is knit in a fingering-weight 100% Superwash Merino Wool single ply.
For this project, any fingering-weight yarn can be used. It is possible to use a thicker yarn as long as all colours used are of the same weight and the needle size is adjusted accordingly. Choose a needle a few sizes smaller than recommend for the yarn, so that the stuffing stays in. For example, a DK-weight yarn and US #2.5/3mm needles would work very well for this project.

Colour recommendations
I recommend 3 contrasting colours: a light MC and a medium and a dark for the contrast colours.

US #1/2.25mm needles for small circumference in the round Note: because of the small stitch counts, short DPNs are recommended for this project

optional: 4.5mm safety eyes, a pencil with an eraser end to help with stuffing

40 sts /52 rounds = 4 inches/10cm in stockinette stitch
The exact gauge is not crucial for this project as long as the fabric is tightly knit so the stuffing is not visible through the stitches.

The elf mouse is knit in the round, bottom up. There is minimal sewing.

The arms and tail are worked separately, then knitted with body.

The ears are knit by picking up marked stitches.

The nose and mouth are embroidered.

When stuffing, add small amounts at a time.

A pencil eraser end is a great stuffing tool.

The hat is knit in the round.

The tunic and pants are knit flat, then seamed.

Using MC and the Long Tail method, CO 6 sts, making sure to leave yourself a tail of about 4 inches/10 cm. Distribute sts across needles as you prefer and join for working in the round.

Ears
Work 2, one for each marker placed in Round 17 above.

Using ear marker placement as a reference, pick up (but do not knit) 4 sts at a slight angle as follows: 1 strand of the marked st and 3 more sts towards side of head, making sure the last one is 1 round back from the marked stitch, to set the ear at an angle. See Figure 1.

Using a second needle, pick up (but do not knit) 4 strands just behind the first needle (towards back of head).

With back of head facing you, join MC. Leave the stitches on two needles as set for now.

If working on traditional DPNs, distribute your sts across three needles at this point.

Cut yarn. Close ear tip by passing yarn through sts with tapestry needle and cinching. Bring yarn inside ear and out at back of head. Use ear CO yarn end to sew a small pleat at base front of ear. See Figure 2. 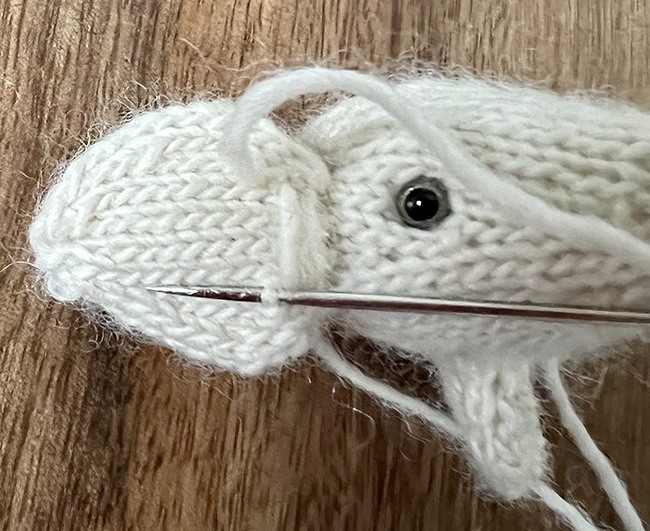 Poke end through to back of head. Tie a knot with other ear yarn end. Poke ends inside head.

Begin by stitching the width of the marked stitch 5-6 times. See Figure 3.

Then, st several sts above and under the shape to even it out. See Figure 4. 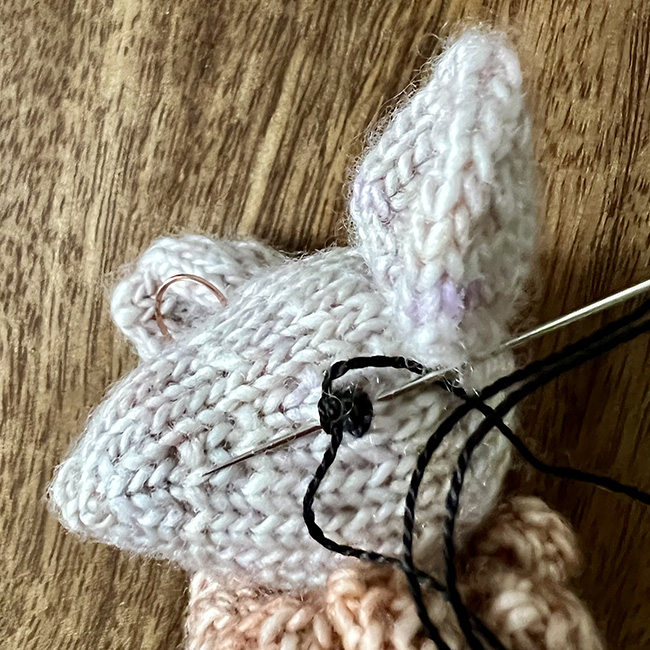 When happy with shape poke both ends out at back of head. Pull lightly, knot and hide ends inside head. It can be a circular or an oval shape. This is really up to you. The important thing is symmetry. You'll want to try to stitch two eyes of similar shape and size.

Nose
Using an embroidery needle and 14 inches (35 cm) of 3 strands of light pink embroidery floss, embroider nose using satin st. Leaving a 4 in (10cm) tail, begin under the nose and bring needle up on one side of the nose area. Embroider a small “V” shape, to outline the nose. Satin st horizontal lines back and forth to cover the nose area until the yarn below your sts is hidden and you are satisfied with the look. See Figure 5.
Figure 5

To finish, bring thread out under nose, in the same space as the other end. Pull lightly, knot and hide ends inside head. 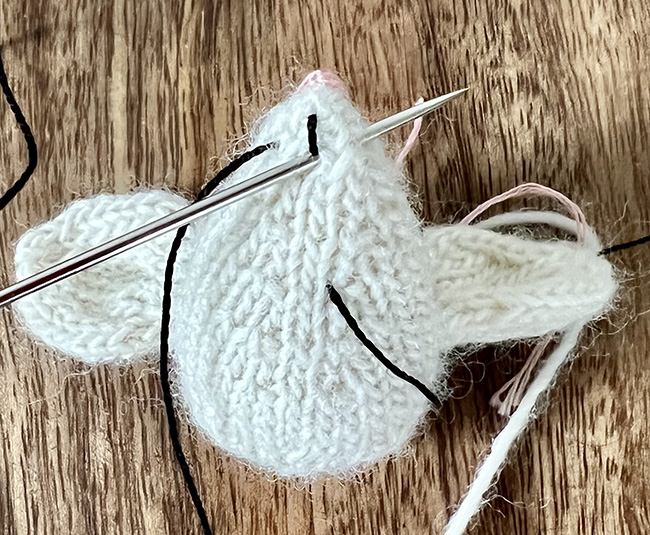 Stitch back to center once again to finish the shape. See Figure 8. 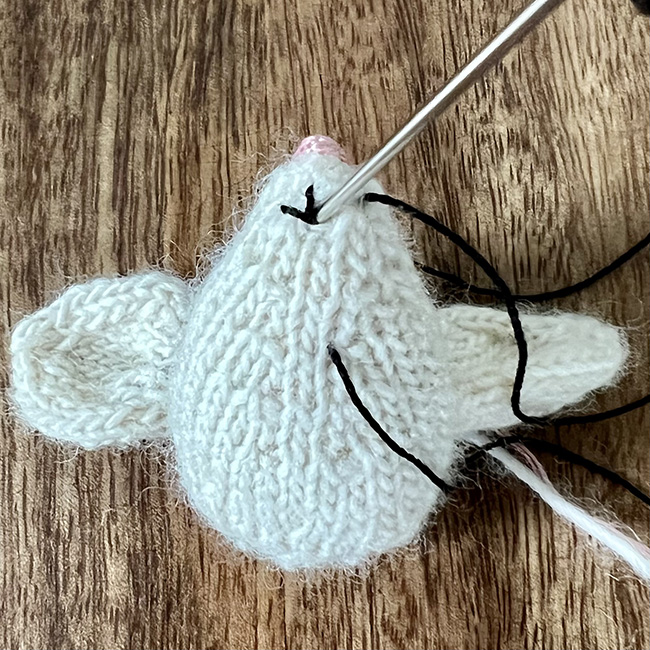 Push thread out to same space as other yarn end lower down. See Figure 9. 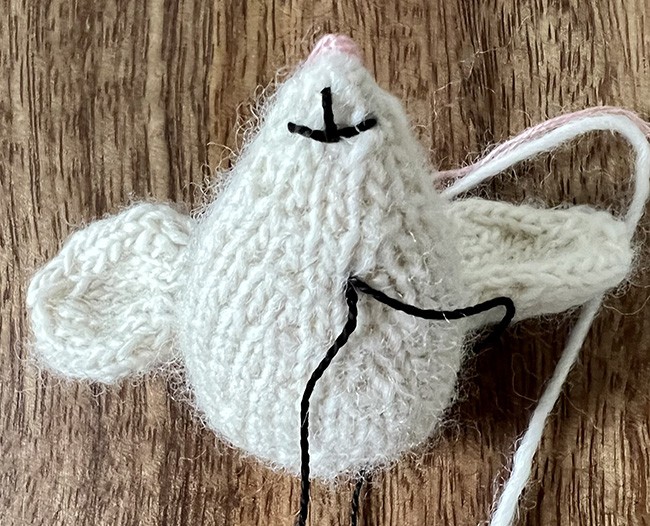 Once facial features are embroidered, cinch back of head sts to close hole, secure and hide end inside head.

Using MC and the Long Tail method, CO 6 sts, making sure to leave yourself a tail of about 6 inches/15 cm. Distribute sts across needles as you prefer and join for working in the round.


Cut yarn, leaving a tail of about 4 inches/10 cm.
Use CO yarn end and tapestry needle to close hole by passing yarn through CO loops. Secure and weave in end inside. As you work the following rounds, pause a few times to lightly stuff the hand and arm; you should only stuff the lower two-thirds of the arm, leave the upper third unstuffed,

Join CC1. You may prefer to knot yarns ends because of the small circumference.

Place first 3 sts on 1 needle and last 3 sts on another. Using an extra needle, join front and back of arm as follows: (K1 st from each needle tog) 3 times. 3 sts.


Cut yarn, leaving a tail of about 4 inches/10 cm. Gather CO sts with tapestry needle by passing yarn end through sts. Pass yarn to wrong side of fabric. Secure and weave in end.

As you work the following rounds, pause a few times to lightly stuff the foot and leg; you should leave the top half inch/1 cm unstuffed.

Join MC. You may prefer to knot yarns ends because of the small circumference.

For the first leg, cut yarn leaving an 8 inch (20 cm) tail. Finish stuffing, leaving the top half inch/1 cm unstuffed. This will be the left leg.

For the second leg, work as for the first, up to and including Round 29.
Do not cut yarn. Place a removable stitch marker in last k st. Finish stuffing, leaving the top half inch/1 cm unstuffed. This will be the right leg.
Then place sts parallel on 2 needles as follows: next 6 sts of rnd on one needle for front of leg, and last 6 sts on the second needle for back of leg.


Hold the needles with the second (the right) leg so that the back of the leg faces you; the working yarn will be on the left.

Close and Join Legs
At this point, to allow legs to be mobile, we will sew several stitches on the wrong side of the work where the top of legs and the body meet, to bring front and back of each leg together.

Using yarn tail end of left leg, working 2 rounds down from the needles, pass tapestry needle through purl bumps on the inside of the work, alternating between front and back of leg stitches. Sew from one side of the body to the other. When you reach the center where the legs join, close the space, if any, with several stitches. It is important to stay level, working into the same round's purl bumps, as you sew across, so that the join is straight across and even. See Figure 11.

Secure and weave in end.

Round 6: Place 4 tail sts on a spare needle, and hold it parallel to the needle holding the next sts to be worked, (k1 body st tog with 1 tail st) 4 times, k to end; then k2 from the start of the round. This positions you at the center of the tail, and at the previous start of round. 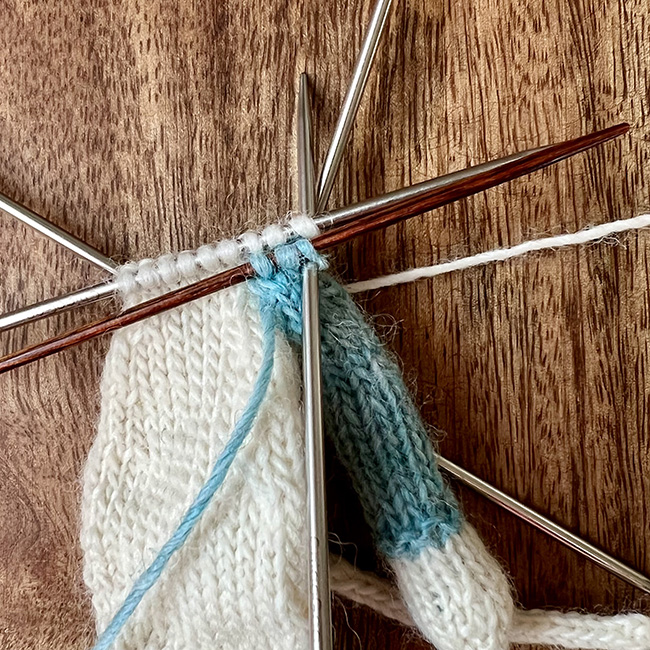 Rejoin 3 sections
Note: If you wish to work the collar in a contrasting color, change to that color now.

Gently steam pieces to block. Dress elf mouse with tunic. Use BO yarn end to seam tunic at the back using mattress st, sewing from the collar downward. When you pass the Vikkel braid, work a horizontal duplicate st over the sewn sts and continue mattress st to end. Weave in ends.

Work another leg the same way, but do not cut the yarn, and leave the sts on the working needles.

Sew up inner seams of pants, starting at lower edge of legs, then sew back of pants from crotch up to marked st. Leave a space for the tail. Sew ribbing section at the waist. Weave in ends. Steam block.

Hat
Using CC2 and the Long Tail method, CO 28 sts, making sure to leave yourself a tail of about 3-4 inches/8-10cm. Distribute sts across needles as you prefer and join for working in the round.

Cut yarn, pass through sts, secure and weave in ends.

To block, gently steam the finished mouse and its outfit. 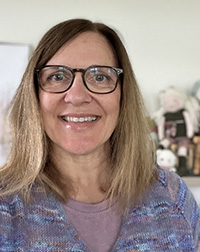 Manon lives in Bromont, Quebec in Canada. After a 25-year career in education, she now allows her passion for the arts to inspire her daily occupations: Knitting, sewing, quilting, needle felting, painting, hiking, photography, and teaching a few knitting classes. She values the precious moments spent with family, friends and this wonderful online knitting community.

You can find more of her designs on Ravelry.