Amy, Knitty's editor, loves rabbits and has lived with several. Meet them here.

The rabbits of Knitty (with bonus dog!) 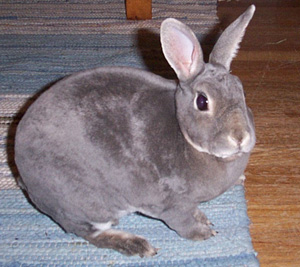 Yes, this is a knitting magazine, but sometimes you need to take a moment, put down your needles and rub the bunny.

This was Newton (left) (1993-2005). She was the most adorable, loving, softest rabbit on earth. She was litter trained, came when called and gave kisses. For hours.

A few months after her 11th birthday, her body wore out and she left us. But her joyous spirit lives on. I really miss her. 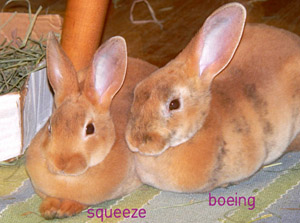 Meet the spayed sisters (right): Boeing [6+lbs -- 2005-2015] and Squeeze [4lbs - 2005-2019]. Boeing didn't give kisses; Squeeze did. Boeing occasionally enjoyed being held and cuddled; Squeeze would rip your lips off if you tried. Watching them take care of each other is a pleasure I'd only imagined. They were immaculately clean, because they always groomed each other. Like sisters, sometimes they cuddled, sometimes they couldn't be far enough away from each other.

Squeeze lived to the remarkable age of 13 before her body gave out. She lived the last 2 years of her life on Toronto Island with her dad. Lucky girl. Tully was abandoned in a field with his two brothers in a huge plastic bin. What kind of person would abandon that face? He lived with Amy for a much-too-short 2 years, before pneumonia got him and took him away.

Tully was super affectionate, extra chill, yet also the most vicious biter Amy's ever met. She still has the scars. He was a fabulous road-trip companion and loved food more than any rabbit ever has. Man, we miss him. This is Rabbi Schmooley ben Timothy (right), a tiny Harlequin something or other, rescued from the Alliston Humane Society on March 1, 2019. If you look at him from a certain angle, you can almost see a little yarmulke on his head (a trick of his coloring), and that's where he got his name. He's very small, very soft, very curious and gently takes pellets from Amy's hand with his very sweet and tiny mouf. Amy may miss Tully very much but she doesn't miss his bites.

Amy's looking forward to getting to know him as he grows up. 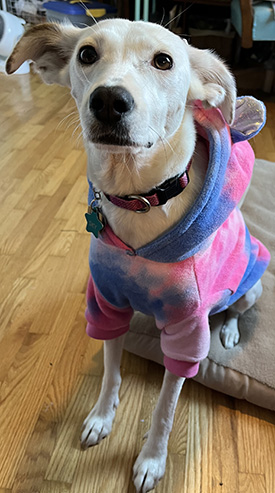 Living through a pandemic does something to one, and to me, it made me decide that I'd waited long enough to adopt a dog. Fear of dogs around bunnies had stopped me over and over, but I decided I would make it work.

Sky is a street mix (sort of a dog soup) who was born in Turkey, and rescued along with her mom, when she was a tiny pup. Both were brought to Canada by Stray to Play who approved us for foster-to-adopt, so we could see if Schmoo and Sky could live together safely. What we found out was that we loved Sky so much, we couldn't let her go. So far, she and Schmoo have had limited (leashed) contact without bars between them, and mostly Sky just wants to play with him. Schmoo thinks Sky's just fine as long as she's not chasing him to play with her. It's a work in progress.

Sky is the sweetest and easiest puppy I could have hoped to adopt. The first few months were a little bumpy as we both learned how to live with each other. But now she has figured out what cuddles are and really likes them, loves chasing squirrels and learned how to fetch from watching the neighbor dog do it for 5 minutes. She's an amazing being, and I'm so glad I got over my fears of what might happen, and embraced the whole dog mom thing. I'm (no exaggeration) obsessed with her, and am considering getting matching hoodies.

If you want to adopt a bunny, visit the House Rabbit Society to learn more about rabbits as housepets. They're wonderful pets, but they require different care than cats or dogs, and you and the bunny will be happier if you understand who you're bringing into your household.

Amy found Tully and Schmoo on Petfinder and the House Rabbit Society rescues thousands of bunnies as well. There are so many abandoned rabbits that need permanent, loving homes. Oh, and if you adopt an angora, you can knit a sweater from your bunny's cast-off fur! There's an article in that, isn't there?